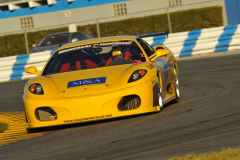 Based in Wellington Florida, FLY YELLOW is in the business of helping promote businesses by placing corporate advertising on race cars that participate in the vintage and historic sportscar racing.

A recent survey estimated that watching auto races is the second most popular TV spectator sport around the world. (OK, it's dominated by NASCAR in the US and Formula 1 outside the US. But sportscar racing –has gained significant popularity in recent years.

The recent 24 Hours of Daytona was broadcast on a variety of NBC affiliates. The opening hour and final two hours of the race were broadcast on NBC, while 15 additional hours of the race was run on NBCSN. In addition, fans could watch the entire race through NBC's paid services, NBC Sports Gold and the NBC Sports app. NBC reported a substantial increase in viewership of the race across its platforms. 829,000 people watched the one-hour opening of the race on NBC, and 1.23 million tuned in to the last two hours of the race, which was broadcast from 2 to 4 p.m. on Sunday on NBC. IMSA says viewership of WeatherTech Championship events on NBC Sports has nearly doubled—an increase of 89 percent—since the series races last aired on another network in 2018.

A survey indicated that 92% of fans recognize that drivers could not run their racecars without sponsorship. Fans are more likely to purchase sponsor’s products than are fans of other sports. One study shows that race car fans’ sponsorship awareness is bot extensive and accurate, with 96% of fans being able to identify the sponsor. Similar studies in other sports show that none come close to this type of product identification.

We help promote businesses by placing corporate advertising on race cars that participate in the vintage and historic sportscar racing.